This is going to be one of my random English - language posts, as for some reason it is easier for me to write about an  embarassing pursuit of my "15 minutes (more like 15 seconds) of fame" in English - same with swearing.
Jay Rayner is arguably the best - fed man in Britain. He is The Observer's restaurant critic, but writes for a wide range of other magazines as well, and regularly appears on television, reporting on various food - related issues. He is, rather unusually, both an acclaimed novelist and a prize-winning food writer, a combination that I find delightful, which is why I stalked him during his foray into the Hampshire countryside (not really).
Jay was hired by one of the main commercial channels, Channel4, to front a series called Food: What goes into your basket? As the title suggests, the series was created to investigate the food industry. It is, in truth, quite a derivative idea - there had been many similar programmes on British TV already, and no doubt there will be more. If you start flicking channels at any given time, day and night, you are bound to stumble upon at least one cooking or food -related programme, and it doesn't even matter that much how many channels you have. There are some people that claim the profusion of cooking shows is partly to blame for the Brits' porkiness, but I doubt it.*
Food... was, also unusually, filmed largely on a working Hampshire farm. Not just any old farm, though - Laverstoke Park Farm is now a trusted brand that foodies across the UK recognize and seek out in supermarkets and delis, and buy online. I wrote about their delicious buffalo burgers before - but they also produce buffalo ice-creams, which Lucas Hollweg, Sunday Times's chef and food columnist described just last week as the best he'd ever tasted (he was referring specifically to the coffee flavour ice cream, but they do a range of flavours and I have also tried and loved them - there are Laverstoke Park ice cream parlours in Selfridges and Harvey Nichols, but you can also buy them in tubs from Waitrose). Where there are buffalos, there is mozarella, too, and theirs is moreish. The owner, Jody Scheckter (whom we met), believes in raising his livestock ethically and promoting slow- growing heritage breeds (the farm is certified as both organic and biodynamic) - their meat is considerably more expensive, but also noticeably tastier - well, one follows the other and the old adage "you get what you pay for" is certainly true yet again. The ultimate accolade for any food producer is being stocked at that temple to all things organic, fairtrade and carbon- neutral - the American chain Whole Foods - and Laverstoke Park DOES supply Whole Foods stores in London. 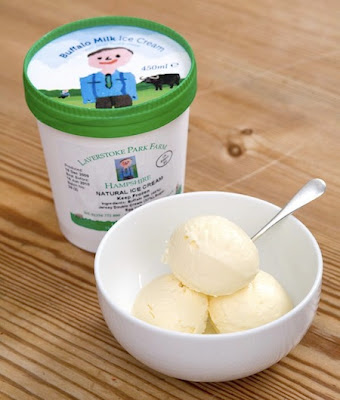 I found out about filming in Hampshire on trusty Twitter - all the other people in the audience, it turned out, got their tickets from a specialist website called Applause Store, where you sign up and hope to be picked to be in the audience for various shows, most notably Top Gear. You don't get paid, so people do it for the thrill of being on TV and meeting TV personalities live - as was my motivation (it was not to stalk Jay, I swear). I have now signed up, so I might get some more "seconds of fame" yet.
What was reduced to about 25 mins of screen time was filmed over 5 hours. It is hard work being a member of an audience - first we had to wait 1,5 hrs (I kid you not) for a bus to take us a distance of about 2 miles (if we'd walked, it'd have taken much less time), then we were treated to loads of unhealthy food (the irony of that wasn't lost on us) in the form of Mars bars and the like; fortunately, there were bowls of fresh fruit as well. We were then herded to a barn, that had been adapted as a TV studio, where we stood in a semi-circle for about 5 hrs, staring at Jay and Ravinder, looking interested. As it happens, it really was interesting: the items discussed were: olive oil, nostalgia foods (as in: traditional English foods that people here ate in the Sixties and Seventies) and eating deer. We were given food to taste - after discussing olive oil, Ravinder Bhogal, Jay's co-presenter and a chef, who looked beautiful in a Phillip Lim dress and Miu Miu shoes, made little doughnuts, using olive oil instead of butter to make the pastry. Then they gave us steak and kidney pie, mashed potatoes and peas, TWICE - to show us the difference between the way food was made 30 or 40 years ago, and what it tasted like now. I have to say: food made from the old -fashioned tins (mash was made from instant powder, ughh) tasted horrible and artificial, whereas modern style food, exactly the same dishes, tasted much better. It was, however, much fattier and 3 times more expensive - which goes some way to explain the obesity epidemics. Ready made pies and mash, and convenience foods in general now contain a lot more fat (and therefore calories) than they used to, as fat makes them taste better and consumers demand better-tasting food.
We were also treated to venison and beetroot pie - very filling dish, perfect for winter - but the whole discussion about eating venison meat and the preparation of the pie was not shown on TV at all - instead, they showed an item about supermarket pizza, which had been filmed with a different audience.
In the end, I appeared on the screen twice or maybe thrice, each time for a few seconds. I was crippled with shyness when Jay asked me a question and mumbled incomprehensibly (my mouth was full of food at that point, in my defence). I did, however, manage a couple of photos with him - unfortunately, when you ask a stranger to take a photo, don't be surprised when you end up with one picture, that would have been nice, had it been in focus: 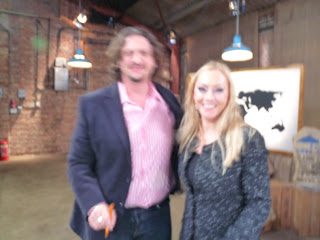 ... and one where I DO look like some swivel-eyed stalker - which is, of course, in focus: 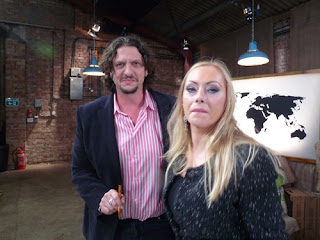